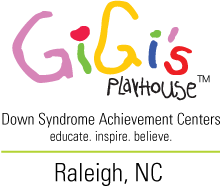 I’m a long-time volunteer with GiGi’s Playhouse Raleigh. I do not have a child or immediate family member with Down syndrome, so I value opportunities for my own children to be a part of the GiGi’s Playhouse community and learn that we’re all more alike than different.

The recent 2022 GiGiFIT Acceptance Challenge was one such opportunity, and I attended with two of my children, including my 5-year-old, Connor. In the days leading up to the event, I reminded Connor that he’d get to meet my friend Kendall and that they have a lot in common… they’re close in age, live in the same town, love sports and school, smile a lot, and love to give hugs. We also talked about how Down syndrome means that Kendall and others like him can do the same things Connor does, but how they learn those things may be different.

On the day of the event, Connor soaked up the activities! He made a noisemaker and cheered on the 5K racers. He socialized. He earned a medal in the Dash. He took the Generation G pledge. And then he was introduced to Kendall!  After an immediate hug, the boys found their common ground: “How old are you? Do you like soccer too? …”  I wasn’t surprised they hit it off, but what happened next really caught my attention: Connor held out his palm with the capital G on it surrounded by a heart. He described to Kendall what Generation G means and why he chooses to be a part of it. Wow! What a moment!

Be Accepting. Be Generous. Be Kind.

Thank you, GiGi’s Playhouse Raleigh, for leading the way. We’re so glad to be part of the positive change you’re making in the world. For hundreds more virtual programs, go to GiGi's At Home!

Signup links to RSVP for programs are e-mailed each Sunday morning at 8am from ProgramsRaleigh@gigisplayhouse.org.

If you do not see this e-mail, check your JUNK FOLDER, find the e-mail and MARK AS NOT JUNK