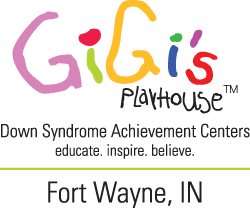 Many people ask me how I became the Executive Director of GiGi’s Playhouse Fort Wayne. My love of this amazing organization began in 2012 when one of my best friends, who was living in Chicago at the time, walked by a GiGi’s Playhouse and immediately called me and told me that she found my dream job. Being in my second year as a special education teacher, I laughed, as I thought I had already found my dream job. I looked up the organization and immediately fell in love. I was in awe that there was an organization that was providing free, purposeful and life-changing programs. I was in love with the mission and knew I had to get involved. From that point on, I was going to the GiGi’s Playhouse website every couple of months, looking at the career page in hopes of finding a way to get my foot in the door. Unfortunately, being a passionate educator, I came with a skill set that did not lend itself to accounting and there was no chance of me resigning from my teaching position mid-year.

Fast forward to May 29, 2015. I woke up that day to celebrate the last day of my fifth year as an elementary life skills teacher. I put on a Keep Calm and Let the Special Ed Teacher Handle It shirt and little did I know that that is the shirt that would change everything. At 9:15 a.m., my mother called me and I could immediately tell that something was wrong. My grandmother had suffered a stroke and I needed to head up to a hospital in Fort Wayne immediately. Luckily, my principal and staff were understanding of the situation and I headed up to Fort Wayne.

When I entered my grandmother’s room, a nurse saw my shirt and began telling me that her daughter’s teacher would love my shirt. She proceeded to tell me about her daughter with Down syndrome. Due to my incessant stalking of the GiGi’s Playhouse website, I had recently found out a Playhouse was coming to Fort Wayne. I began oversharing about GiGi’s Playhouse and told the nurse that she should really check into it. It was at that moment, the nurse let me know that she was a founding member of GiGi’s Playhouse Fort Wayne! My grandmother passed away that day, but through her passing, I got the privilege of celebrating life and shouting the worth of my friends with Down syndrome every single day. How did I become the Executive Director of GiGi’s Playhouse Fort Wayne? It took a lot of patience, persistence and a chance meeting with a compassionate nurse.