Nancy Gianni equates her journey with her daughter to a bus ride.  She explained how some experiences are like driving the bus, some are like riding the bus and sadly, some are like being hit by that bus. Being one of the #luckyfew means that we will share these experiences.  Today we are glad to welcome back to the GiGi’s Blog, Beth Craver.  Beth will be sharing about that darn bus hitting her……and how she got up, tended the wounds and keeps on shouting her sons worth. “Today,  I didn’t even have a chance to look both ways before I was hit head on, by a big, fat, heart-wrenching bus.

We switched dentists because we had to. So,  months ago I set us all up for appointments. Calvin’s and Judah’s were set for today. My husband was supposed to assist in playing zone but as luck would have it he had to work. So, I set off solo with a positive attitude and tales of amazing dentistry to keep Calvin’s anxiety at bay. Not necessarily good or bad…but I never told this office that Judah had Down syndrome. This was thee very first time I had ever done that. Bobby and I talked about it after. We didn’t try and purposely mislead anyone, it’s just not a part of who we are anymore. We used to be  all: ” we have a three year old and a baby with Down syndrome.” “Table for four please. Two adults, one toddler and one baby with Down syndrome” …But these days, we’re passed that. We’ve moved on to “yeah we have 3 boys under 5.” Down syndrome shows up now and then.  It’s  like when you catch a rainbow or see a deer in a field. We acknowledge it and take it all in and then we move on.  I was a bit apprehensive about not mentioning it, but truthfully, Judah is so well loved on in my circle it seemed unwarranted. 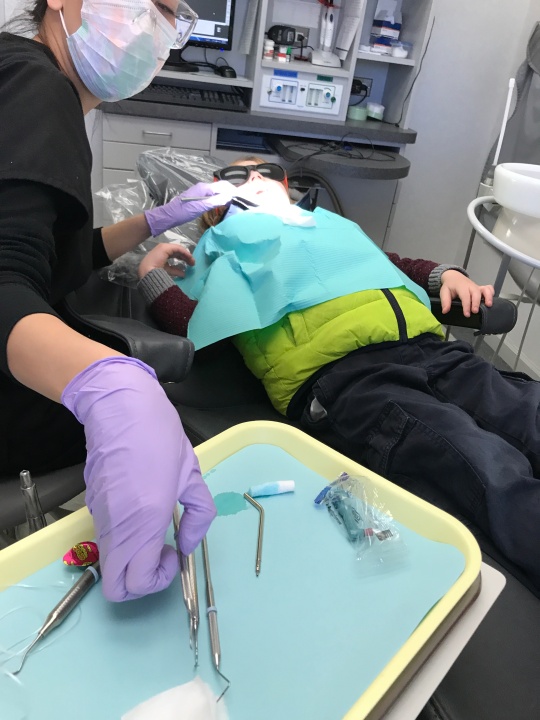 After we were in the  waiting room for over 20 minutes (and if I may say so, my children were absolute angels,) they called us back to a colorful room full of toys and stickers and prizes and bubble gum paste. Gah, I loved that stuff. Calvin really wanted Judah to go first. Cal can be timid and Judah is fearless so to me it seemed to make perfect sense. I agreed with Calvin but we were shut down and instead I had to help the hygienist coax Calvin into the chair. He did great! He was so brave. I know he was scared and that it hurt a little. I was the only one who knew that. Judah did great too. He sat on my lap, not making a peep, watching his big brother like a hawk, making sure he was not being harmed. It was adorable….Then the dentist came in, exchanged some pleasantries and asked me to step in the hall so Calvin could get x-rays.  All went south when she met me in that hall. It started off uncomfortable, it did not feel right and so my awkward   advocating began. I proudly announced,  “this is Judah. This is his first time. He should be good but sometimes he is leery around strangers. He is usually a pretty happy guy though.” And right on cue Judah flashed his most winningest smile, waved and said hi which sounds more like “aaaaaa.” So, of course, I clarified, “he’s saying hi.” *Crickets* My rambling continued, “ I know these little guys with Down syndrome (there I said it) sometimes have trouble with their teeth and his are a bit crooked…..” she stopped me. She said “you know, I’m not a true pediatric dentist so I’m going to have to refer him.” I became panicky.  Didn’t I just come out of a dentist office that resembled Toys-r -us? Then she boldly continued, ” you know, a special need should be sedated for treatment because they move around too much and they can injure themselves.”

I felt myself starting to think: OH NO!!! I could hardly believe it. This cannot be, I thought. Nooooo!!!! Did she just call my kid “a special need?”  I think it’s happening to us. I was spinning and hot and frightened.  Truthfully. I actually thought that I could be imagining it all and that I was overreacting.  So I prodded as I pointed  to Calvin “does he need to be sedated too?” The answer was no and my unease was confirmed. My stomach immediately dropped clear to the floor. I replied with my chest puffed, “well Calvin cannot stay here. They will both need to go somewhere else.  Calvin will not stand for going somewhere different than his brother. ” Then… ” did you still want us to look at Judah today?” I replied, “well not if you aren’t comfortable.” And that was it. She was gone. I think that was it. I was so shocked that at this point I was already texting my husband “oh my God I think we just got discriminated against.” The hygienist returned and praised Calvin. She also asked if I wanted her to look at Judah just for today. I told her that I was just trying to get him used to the dentist and I didn’t need any treatment at the moment. I also repeated that she didn’t need to look at him if it made her uncomfortable. She was clearly nervous and trying to defend her dentist.   She said things like,  “I don’t think it is what you think” and then she mentioned something about Judah needing more than nitrous oxide” I again hoped I was wrong and tried to helped her clarify. I asked,  “oh so if Calvin needs treatment he will need more than nitrous too?” Again she said no.  I finally and calmly said as I was somehow driving on that road up high, ” Do you understand that is discriminatory? You don’t even know my baby. He could sit perfectly still like he has the whole time here. You don’t know. Thank you for taking such good care of Calvin, really thank you, but we can’t come here anymore. You understand that this  is discriminatory. “  (I felt like I uttered discriminatory a thousand times but I think I am too blurred to be sure.)  She gave an apprehensive laugh and the dentist walked in asking if we needed a referral.   I kindly responded “no thank you” and hurried out of that building with my three babies as fast as my feet could carry us. I couldn’t believe it. I sat in the parking lot: red, shaking, muttering, texting,  and ultimately , not able to really comprehend that Nancy was right… we just got hit by the bus.

That’s what happened, here’s how I felt:

Physically ill, so, so angry, hurt, confused, brave, proud, sad, and most profoundly; astonished. Maybe I set myself up for this moment? After all I have always shielded us. I always keep us around positivity when it comes to my son’s disability. Maybe I disillusioned myself right into the middle of oncoming traffic. All day long I started to notice his delays more than I ever had before. I tried like hell not to cry but I cried; more than twice, more than three times. I cried because he’s such an awesome kid and he doesn’t deserve to be judged solely by his almond eyes. I cried because I feel defeated; because I thought we were winning. I cried because my sometimes unrealistic determination made me think that maybe our world had moved on from such ignorance. 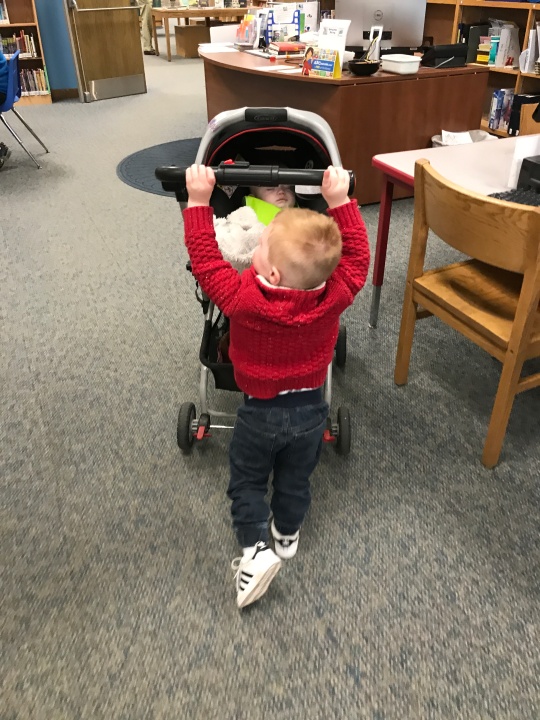 Here’s where I’m at now.

I  reached out to my people. Thank the good Lord for giving me so many amazing people. They helped and they started to heal the brokenness inside me. All of Judah’s warriors stepped up and reminded me that there is more good out there. I won’t say more good then bad because this person is not bad. This person is uninformed and sadly mistaken. I will not be revealing where this place is and who it is because it is not my goal to defame or ruin anyone. With the help of one of Judah’s biggest supporters, we will supply this business with information about what Down syndrome is and the correct language to use. The high road is made of dirt and gravel and potholes. It’s a hard road to take. But the destination is so much sweeter. It feels good here. The people with this heart warming disability make you want to take it.  The love of their spirit won’t allow you to go low. 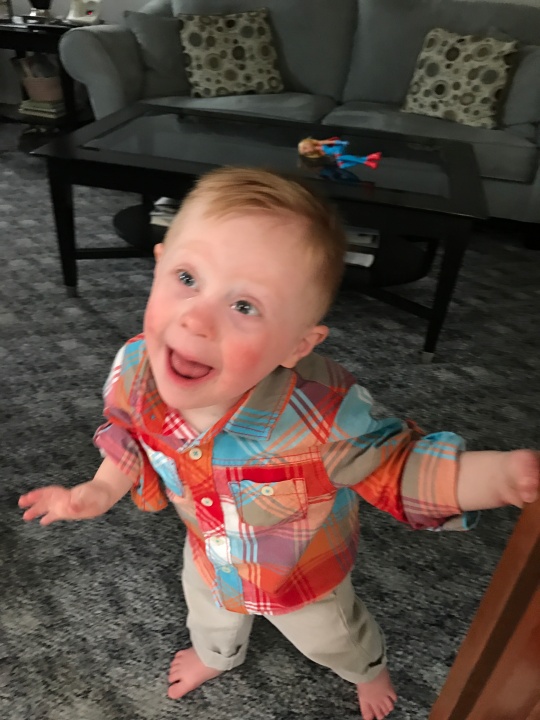 Maybe we save this person? Maybe we don’t? In the end all we can do is stand together and grow bigger. My child has grown the most incredible garden of kindness I have ever seen.  It is fascinating! The enormity of  what his little life has done has performed the unthinkable… it is even healing  the wounds of being hit by a heart-wrenching bus.” 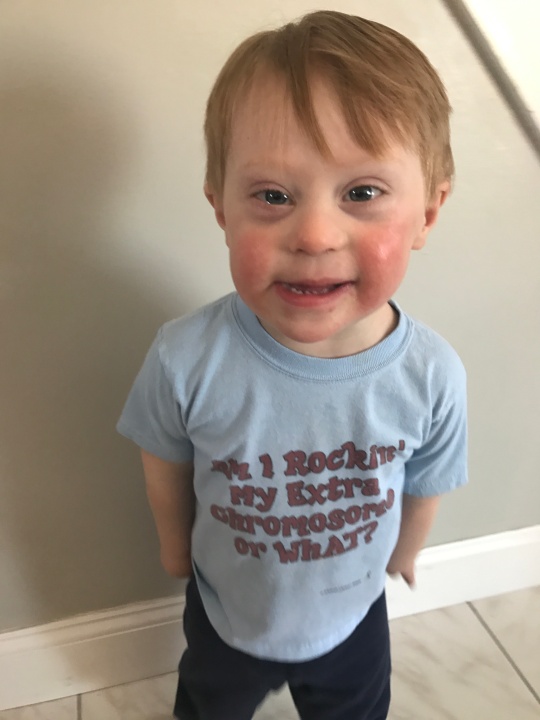 Thank you Beth for sharing your story with us, thank you for standing with us to education, inspire and believe. Judah has a very bright future in front of him, he has a family and crew ready (GiGi’s included!) to help him when he needs it, and willing to learn from him when we need it.  Chin up mama, you went high and we will go there with you.

More of Beth’s writing can be found on her blog HERE.